So, something happened with your Jeep’s 3.6L Pentastar engine and it’s time for some DIY work.

No worries – I’ve got you covered. Though I have to say, there’s a surprising lack of proper diagrams regarding both the Jeep 3.6 firing order and cylinder layouts.

With 1 being at the right bank (passenger side), sitting at the front of your vehicle.

I’ve prepared a diagram, as well as a quick guide to which Jeep models this firing order covers.

I also have the correct OE spark plugs from Mopar. In case you need to get a pack of 3.6L replacement spark plugs, these are 100% identical to your stock ones: 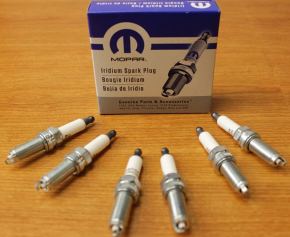 Anyways, let’s continue to the diagram.

It’s one thing to say something; completely another to fully visualize it. Here’s a diagram so you can get more comfortable with any DIY work on your cylinders: 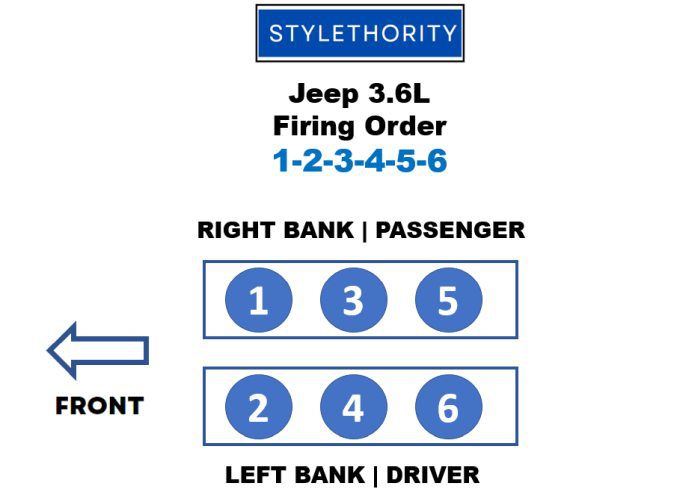 The right bank is the passenger side. It starts with 1 and then runs the other odd numbers – 3 and 5.

The left bank is the driver’s side. Here you’ll find the even numbers, namely 2, 4, and 6.

Remember that you look at cylinder layouts by being in the vehicle and looking forward. This is why cylinders 1 and 2 are at the very front of the vehicle, while 5 and 6 are closest to your dashboard.

What about the difficulty of getting to the actual plugs?

Well, the passenger side (right) is notably easier to do anything DIY on. You just need to undo the intake plenum, then remove the plenum and you’re good to go.

The driver’s side is trickier. All plugs here are under your vehicle’s upper intake manifold. While it’s not too complicated, doing any replacement on these would take more time than the 1-3-5 cylinders on the right bank.

Which Jeep models does this firing order diagram apply to?

Alright, so the Chrysler Pentastar 3.6L engine was introduced back in 2011. It covers a lot of other vehicles, including a plethora of Dodge and Chrysler cars.

What about Jeep, though?

Well, this diagram will prove useful to you if you run any of the following:

This does not change the relevance of this firing order diagram. Remember that a lot of the earlier Jeep models run on a V8 Hemi and the ignition coils and overall setup differ there.

What about the fit for the OE replacement spark plugs I mentioned, the Mopar SP149125AE?

Well, these ones generally fit both 3.0L and 3.6L Jeep applications. In particular, they’re alright with:

It might fit some other more special editions of Jeep vehicles, but these are the only ones listed on Mopar’s site as 100% true fit.

Hopefully, this article helped you out! It’s a part of my guides to Jeep maintenance. As far as the 2013-2018 Jeep Wrangler is concerned, I also have an article on the applicable steering dampers.

For all newer Jeep models which you want to prepare for tougher off-road conditions, I’ve also prepared a Metalcloak vs RockKrawler comparison. Two of the best upscale brands for quality Jeep aftermarket parts.