Sometimes, you just can’t afford a $100+ bucks OEM ball joint. We’ve all been there. Cheaper aftermarket alternatives come in handy, especially in the current tough economy.

Beck/Arnley and MOOG both provide good value suspension replacements. Here’s a fact many people don’t know – both brands are a part of Tenneco now. Tenneco’s DRiV division, to be exact.

Keep in mind that B/A exclusively focuses on parts for foreign cars.

In any case, here’s a quick overview of Beck Arnley vs MOOG in segments:
–

As I said, a fundamental difference is that Beck/Arnley focuses on foreign cars. I’ve seen a lot of Honda or Toyota owners consider the brand as sometimes you get OEM-grade replacements in the box. It’s a 50/50 situation, to be honest.

MOOG has applications for both foreign and US vehicles. Just make sure you get their Problem Solver products, basically MOOG’s premium parts division.

I’ll discuss this and more, so let’s get to the article. Use the Table of Contents if you want to:

If you need ball joints for a Chevy/GMC truck, for example, the choice is obvious. For Japanese or European cars, though, these brands can be comparable on one condition:

You have to spin the wheel and hope for a Japanese/UK-made B/A replacement.

It happens, and I’ve seen people get 555 (Sankei) suspension parts for Toyota in a Beck/Arnley box.

The reason I picked MOOG is the more consistent reliability, to be honest. As long as you skip their budget ball joints, that is.

The premium MOOG line is called Problem Solver. These ball joints (check reviews) feature a few improvements, including but not limited to:

If you’re feeling lucky, though, you can go for the Beck/Arnley alternative. These are your standard replacement ball joints with OE form and fit. You do have an extra coating to deal with corrosion too. 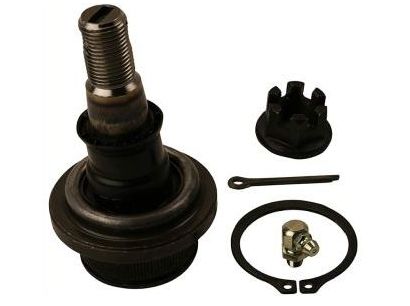 Part of the Problem Solver series. More durable powder-coated metal, also has a dust boot shield to protect it from dirt or water. A sturdy, serviceable and long-lasting ball joint. 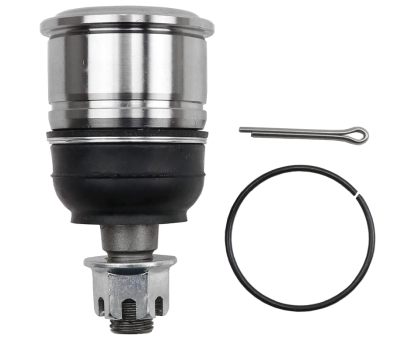 Affordable, decently performing replacement for foreign cars. A little less consistent in terms of quality than MOOG. If you get lucky with an OE part, though, it's a total bargain.

The situation in this segment is quite similar to how the ball joints of these two brands compare.

In this case, the three key improvements in design and function I’d point out are:

Important note: Make sure you’re getting the Problem Solver part by locating the letters in front of the serial number.

Problem Solver control arms are marked with a CK lettering (see example); the economy range is marked by an R.

The standard MOOG control arms are a downgrade from the Beck Arnley alternative. Unless you’re really desperate for cash, I’d advise you to steer away. Always go with the better Problem Solver line.

Much like the ball joints, B/A is a toss in the control arms segment too. Here’s a decent pick, but once again you rely on chance with what you get.

B/A tie rod ends are stellar. I’ve seen them be more consistent in terms of quality and a big benefit is they usually come with all the hardware you’d need.

Obviously, this is somewhat reflected in the price (check it) which might be a bit above MOOG for specific applications.

All of Beck/Arnley’s tie rod ends are extra coated (or plated for some applications) to deal with contamination, corrosion, or rust. The fit and function are as close to OEM as it gets. I’ve seen several Tacoma or Tundra running on these.

If you feel confused about your specific application, you can always use the Check with Beck feature on their site.

But yeah, for vehicles such as Nissan, Honda, Toyota, heck, even some European brands…B/A is a great aftermarket pick.

Who owns B/A?
Where are Bern Arnley parts made?

First, let me continue my story from the beginning of this post.

For a while, Beck/Arnley and MOOG were both a part of Federal-Mogul. Later on, they became a part of Tenneco when Tenneco acquired Federal-Mogul in late 2018.

After a few other acquisitions, Tenneco decided to make a spin-off. Their ride performance parts division got spun off as DRiV in 2019. So, basically, both MOOG and B/A are now a part of Tenneco through this new DRiV label.

As far as the country of manufacture goes…

As I mentioned before, you never know what’s in the box. Beck/Arnley re-packages replacement parts, similar to what MOOG has been doing recently.

For the non-OEM stuff (remember the Sankei I mentioned), you’ll be getting Taiwanese manufacture. This is still better than standard Chinese production; Taiwan has better manufacturing policies.

Taiwanese manufacture is why Beck/Arnley is also quite popular for smaller DIY accessories. A few examples are thermostats (check reviews), PCV valves, CV joint kits, and other components: 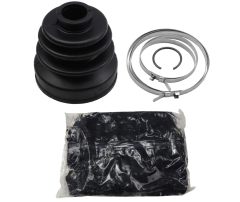 As close to OE fit and function as it can get. Great value kit that comes with grease, the boot itself, and all the hardware you need for DIY installation.

Beck/Arnley is an underrated brand, in my opinion. I think a part of this lack of popularity comes from their specialization on foreign vehicles.

You can see how other entry-level brands that also include American vehicles thrive: Detroit Axle is a good example.

With its limitations, B/A escapes the suspension aftermarket spotlight. And sure enough, the brand lacks some key improvements compared to MOOG’s premium suspension parts labeled under Problem Solver.

However, Beck/Arnley isn’t crap in any way. A budget take on OE parts that you can get lucky with. In a way, a B/A box can be viewed as a trick-or-treat situation. That’s exactly how it feels when you get an OEM part in the box after paying 1/3 of the price.

Hope you enjoyed the article! Let me know if you have any experience with B/A and what you received in your box.

For other foreign car-related guides, you can check out my post on the ever-popular BMW angel eyes. Beck Arnley doesn’t make these, though the brand does have a few BMW accessories.