You should’ve been there. Late 00s, Vette discussion boards…and the everlasting 799 vs 243 cylinder heads discussions.

No joke, some of the threads would get hundreds of replies with theories as wild as they can get. Until eventually the mystery got solved, of course.

They’re identical. They’re fully interchangeable. And yes, the horsepower would also be the same running either of them.

Sometimes you might find a difference in the valves. For example, Corvette Z06 came with 243 heads featuring sodium exhaust valves – typical for the L6 engine.

In all other gens, though, even the valves would be the same, made from stainless steel. 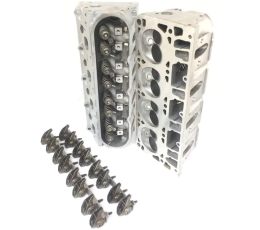 Disassembled, properly cleaned out, and fully inspected for casting integrity. A great set of stock 799 heads for any enthusiast.

There are no hard-set rules either. You can find 243 heads on a Vette or on a Chevy Tahoe, or even a Silverado. Same for 799 heads. It depends on the year your Chevy was manufactured – be it a sports car, a truck, or an SUV.

Back in the 00s, some Vette or Tahoe owners were shocked to find both casting numbers on their vehicles. In case you experience the same, don’t fret. As I said, this isn’t an issue.

How did this debate reach its conclusion, though? Let’s take a look.

799 vs 243 cylinder heads:
The topic which put a mystery to its end

As I mentioned earlier, mid-to-late 00s Chevy forums were rife with this comparison. There were a lot of assumptions, misinformation, and wild theories thrown around.

Heck, one thread even got to something like 500+ replies. It was absolutely crazy.

The end of this debate came with user LTC Z06 (guess what car he had, heh). You can read his particular comment here.

In short: He talked to a representative of GM research, along with another established user. He’s the one who broke the news that essentially, 799 and 243 are absolutely the same.

The numbers simply point out what mold the castings originally came from. 243 is the OG mold stemming from GM research; at a later stage, the 799 spread out to other manufacturers too.

Quick specs of the 799 heads

Here’s a quick data sheet on the specs of 799 heads. Due to the similarity, 243 heads should follow the same characteristics in normal situations:

Keep in mind that this is the stock LS version of the valves, otherwise known as Stage 1. This set of 799 cylinder heads is a good re-manufactured option if you can’t find them elsewhere.

In general, they go in LS2 or LS6 engines as they should. LS1 might need some accommodation (I haven’t seen it first-hand). Whether it’s a sports car like the Corvette or trucks/SUVs like Silverado, Avalanche, Tahoe, the 799 heads should fit 4.8L, 5.3L, 5.7L, or 6.0L engines.

If you search around, you can find Stages 2, 3, and 4 too. I haven’t been interested in post-Stage 1 valves, but I’ve found the following charts:

Generally, Stage 2-4 valves should feature stainless steel construction. Some of them might have gone through a milling process to clean them up.

As far as porting the heads go if you DIY it, here’s a neat video documenting the process with some tips:

Going back to that legendary thread on the Vette forums, there’s not much amplitude in the horsepower between these cylinder heads either.

Back then, the GM representative pointed out you’re looking at a 1 to 10 horsepower difference at most. Obviously, we’re talking about HP boost, not HP deduction.

So if you’re worried about whether one of the cylinder head castings is more powerful than the other…It’s not really a valid concern. 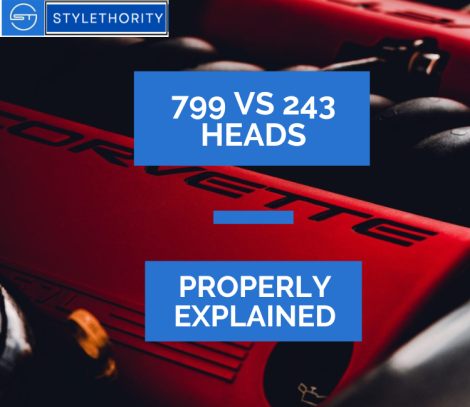 I know that maybe some of you wanted a two-liner that answers whether 799 and 243 heads are different.

However, these being identical wasn’t that well known at an earlier stage of the internet. I thought some pieces of trivia would be a fun addition to this post.

Hopefully, it was an interesting – and helpful read for you.

This post is all about the small-block engine side of Chevy. If you’re also into tinkering around with big blocks, check out my 454 engine spark plug guide. I’ve included a bit of trivia there too.

For an equally classic take on Chevy manufacturing history, I’ve written on carbs for the 283 or 305 engine. Beautiful, powerful beasts from half a decade ago that are still the trophy of hot rodders around the globe.